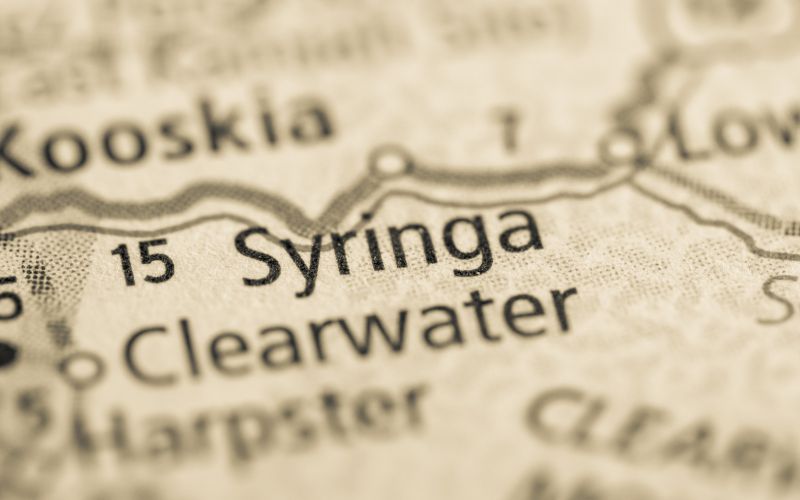 In 1962 people traveling through the small hamlet of Syringa, Idaho, (named after the State Flower), saw some curious activity along the highway as construction began on a simple one-story building. It was the dream of a few folks that lived along the Middle Fork of the Clearwater, including one Gus and Gerry Denton. Gus was born and raised in the area and had a small sawmill.  One day he walked into the barber shop in Kooskia, just down the river from Syringa, when a hush fell over the place. Gus asked what was going on. A friend confided that they’d been talking and folks were worried that Gus would go broke starting a café in such a remote location.

Not to be deterred, Gus and Gerry continued construction and a few months later, opened Idaho’s original Syringa Café. It wasn’t long before it gained a grand reputation for good home-cooked meals and most famously, a legendary huckleberry pie. For over 25 years people would drive from miles around to enjoy a home-cooked meal and a piece of homemade pie. 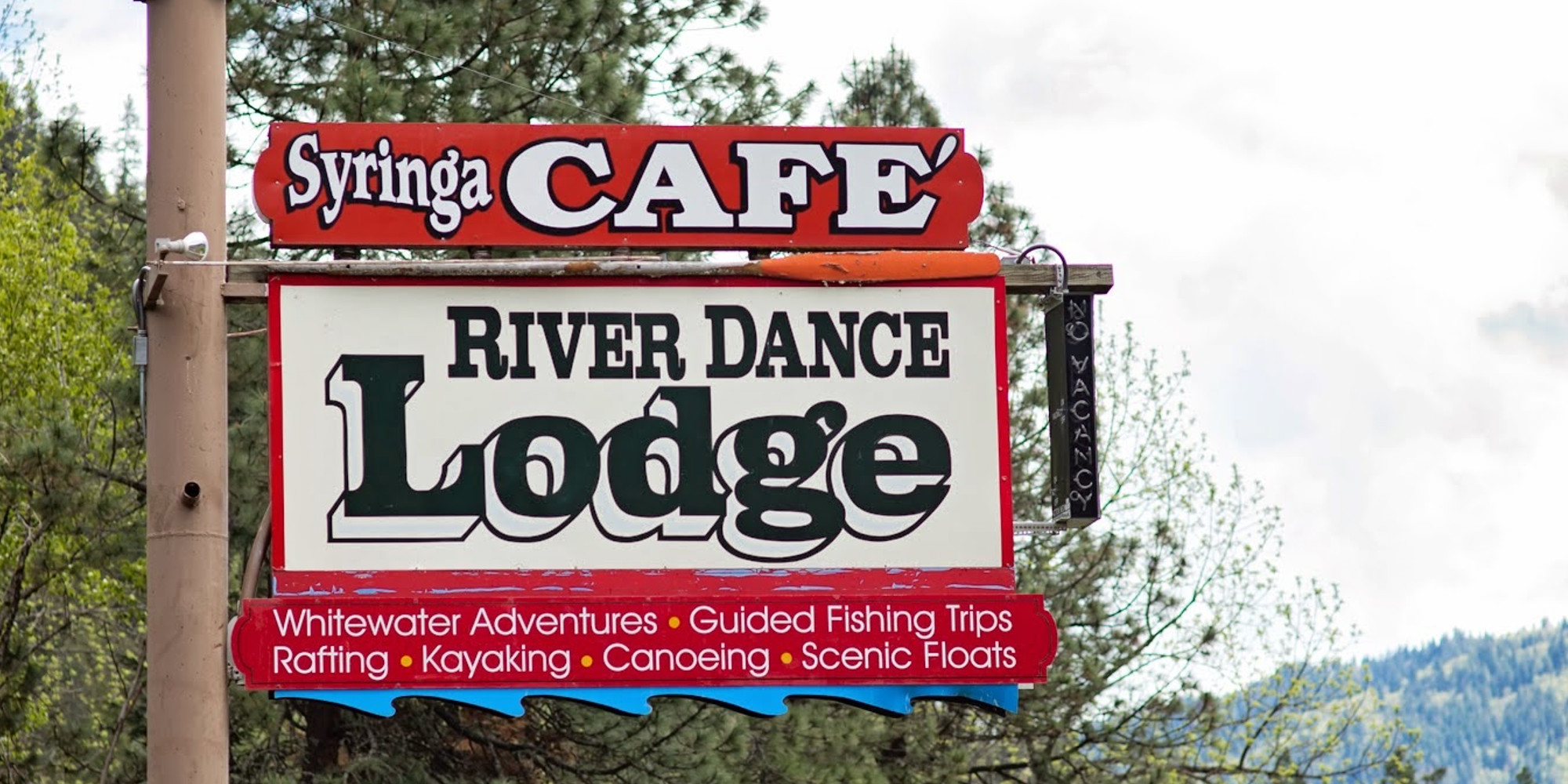 Time went on and the with it came changes. The hundreds of 18-wheelers that rumbled down highway 12 from Montana to the Port of Lewiston started to diminish. This was because it was safer to travel on the newly improved Interstate 90, about 100 air miles to the north, rather than navigate the curves of Highway 12 is it followed the course of the Lochsa River.

In the early 1980’s the Dentons moved upstream to the Lochsa Lodge and the Syringa Café, once a booming business, wilted as it went through several changes of ownership. The decrease in truck traffic and other factors led the café to a close by the late 1990’s. It sat idle for several years and the property caught the attention of a couple who made their livelihood running guided whitewater rafting trips.

Betsy Bowen and Peter Grubb owned ROW Adventures, then known as River Odysseys West, one of Idaho’s best-known rafting companies. They had started running trips on the wild Lochsa River in 1984.  In the first years of their Lochsa business they based out of Three Rivers Resort located at the confluence of the Selway and Lochsa rivers. As business grew, it was time to find their own base of operations.

Naively they thought they’d just dust off the counters, scrub the floors and open the doors. Instead, it took over a year of elbow grease and rebuilding to bring the café back to operating order. Betsy’s father Chan came to help as well as a few other friends. In the spring of 2004 the newly refurbished Syringa Café welcomed its first patrons and proudly served them the café’s signature and famous huckleberry pie! 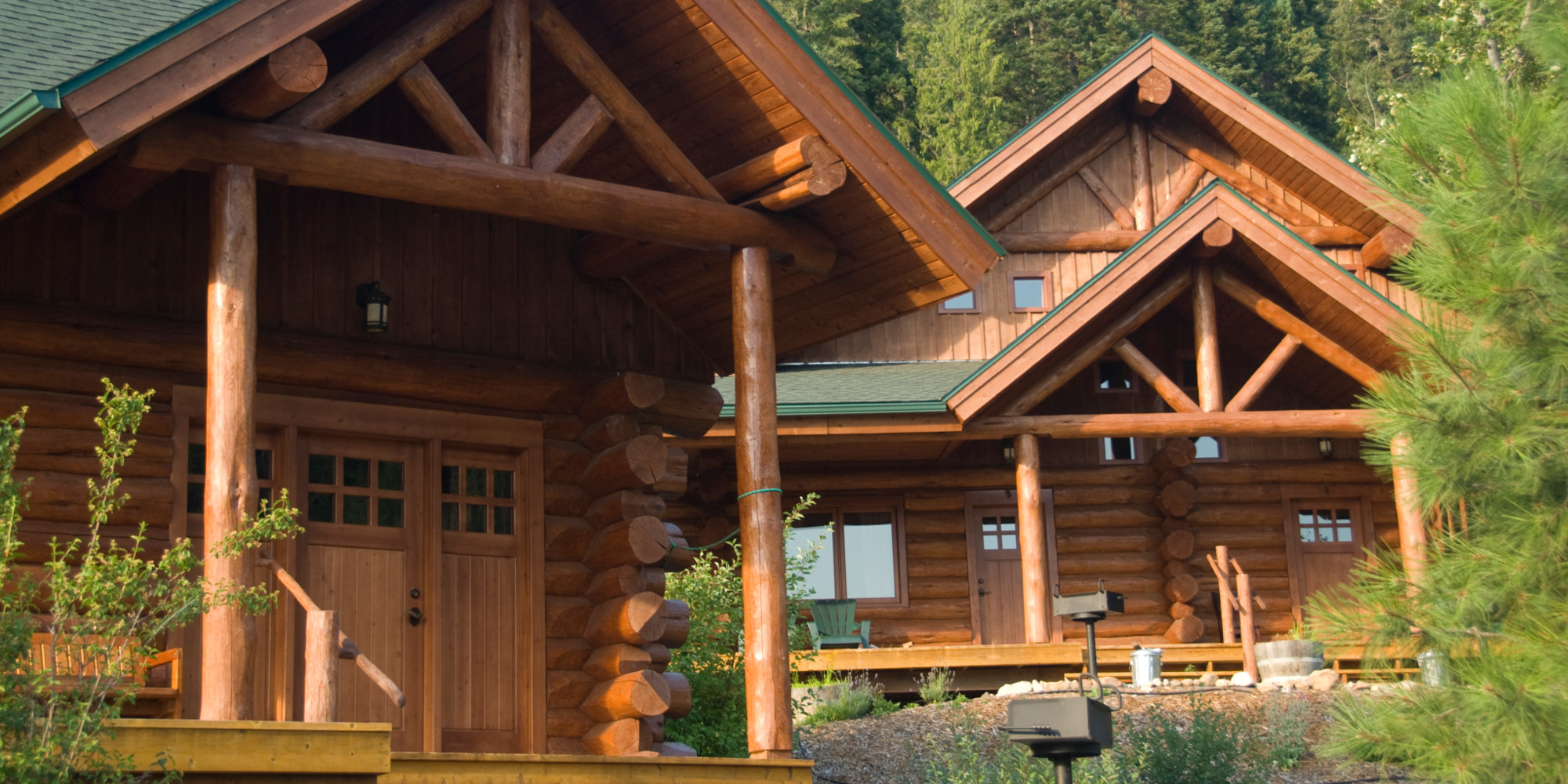 At the same time that Betsy and Peter were rebuilding the café, they were laying the groundwork for a much grander project. They saw an opportunity to build a high-quality log cabin resort that would become Idaho’s first outdoor adventure resort.  It would have the flavor of a guest ranch, but without horses. After a couple of false starts, they finally got funding and found a log cabin contractor to make it all happen. In the fall of 2004, a local friend named Bart graded a road and started the initial landscaping of the project. In December foundations were poured. In March 2005, the logs arrived and like a Lincoln Log cabin, were stacked up in a matter of days. It seemed to be happening fast – and it was. On May 10, 2005 the first guests stayed in a few of the cabins. They weren’t quite done, with kitchen cabinets still on the floor, but the guests were flexible and supportive.

Construction continued all summer. Trees and bushes were planted. Trim, stain, tile and details were completed. By October, just in time to close for winter, the cabins were done.

Since that time, Betsy and Peter have continued to poor a lot of blood, sweat and tears into River Dance Lodge. Log cabins require constant maintenance. Café equipment routinely breaks. Seasonal help can be a challenge.  It has truly been a labor of love. 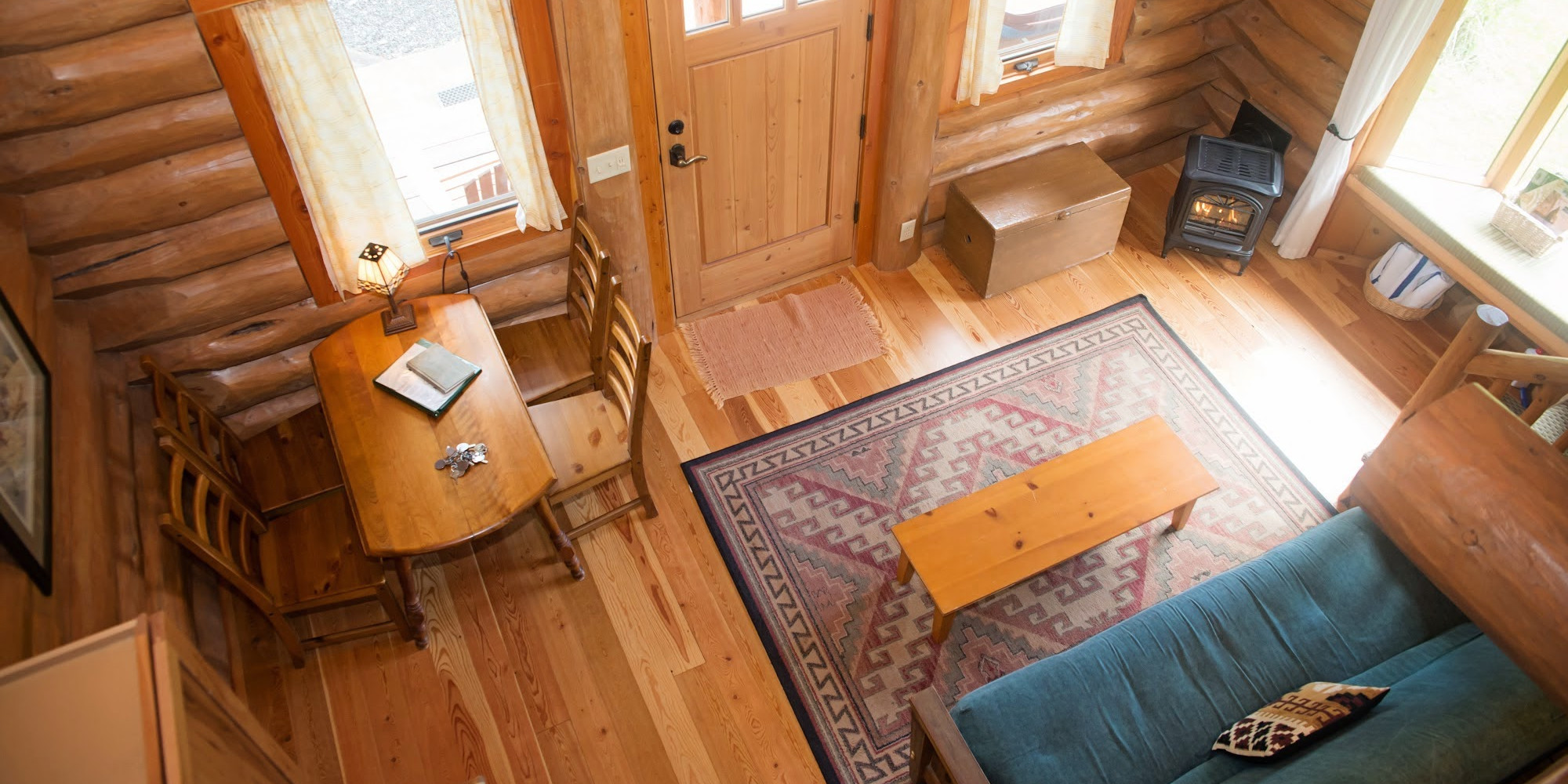 A peek inside the Lewis & Clark cabin at River Dance Lodge

Today the trees planted in 2004-05 tower above the cabins. The place feels as if it’s always been a part of the landscape. We are proud that it complements the area and is compatible with the beauty of the Middle Fork of the Clearwater, that flows in front of the resort and that Congress designated in 1968 as one of the first 8 Wild and Scenic Rivers in the Nation.

River Dance Lodge is a place to celebrate rivers. Whether you’re a paddler, an angler, a Lewis and Clark history buff, or simply traveling through, it’s a place to find solace.

In 2011 we added 3 glamping tents to the property, each furnished with unique antiques, a comfortable king bed and a soaking tub on the back deck. 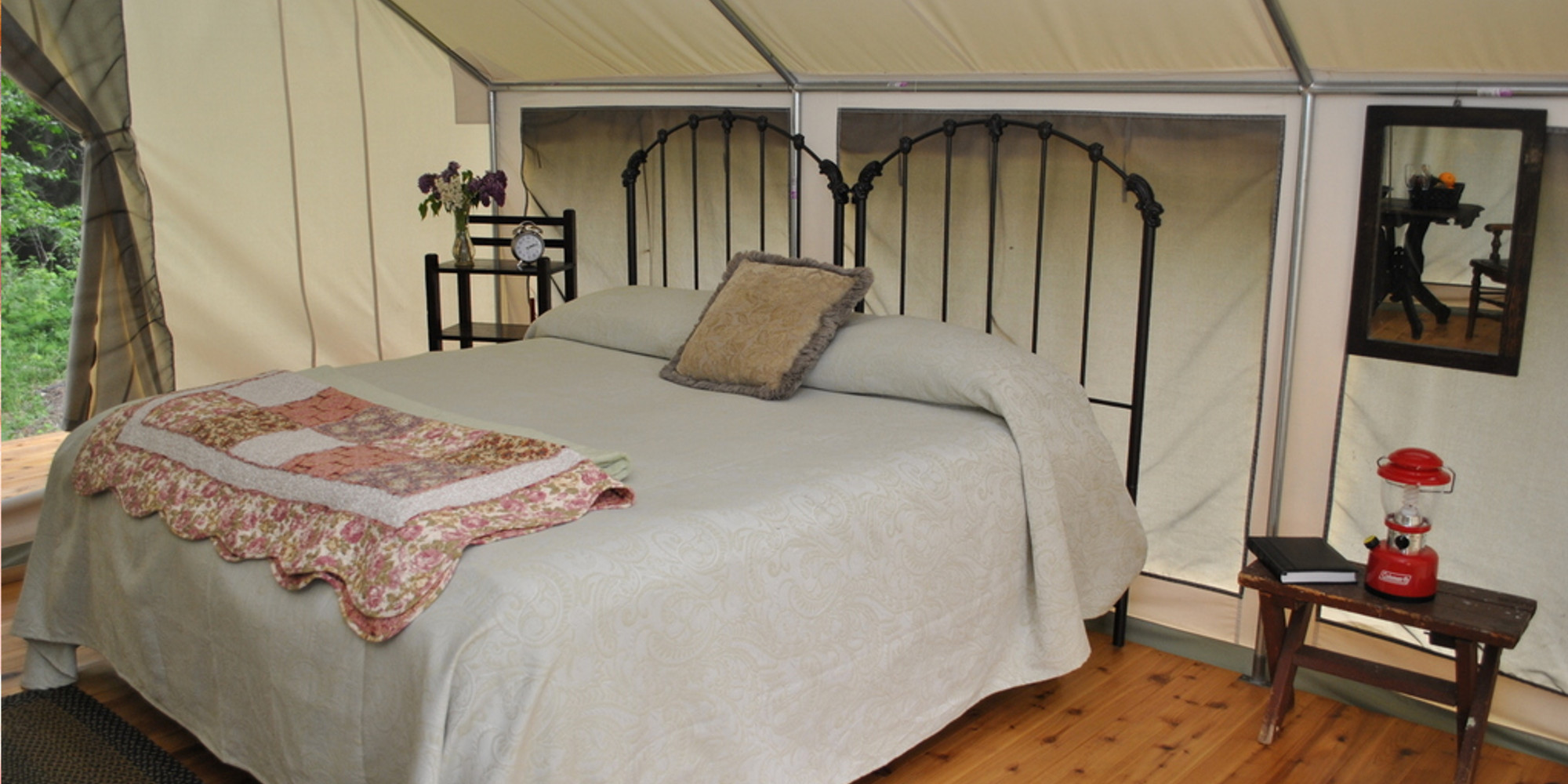 A variety of guided activities are offered from the lodge, including whitewater rafting on the Lochsa (May-July); gentle float trips on the lower Selway and Middle Fork of the Clearwater (July-August); fly fishing trips (July-September); mountain biking (June-September); guided hikes (May-September) and much more.  The area is easy to explore on your own as well, with wilderness hot springs, walks beneath towering cedars and plenty of local history.

This is the land of the Nez Perce. The site of their creation story is just 20 miles west of River Dance Lodge and is called the Heart of the Monster. Visiting the site is truly inspiring.  The Nez Perce have lived here for thousands of years and we acknowledge and respect that this is their land.

In more recent times, Canyon Creek was the site of a Japanese internment camp in the 1940’s during a dark period of U.S. history.

With all there is to see and do, it’s easy to fill several days around River Dance Lodge.  And when you’re hungry, the Syringa Café offers a delectable menu! Inside our main lodge building you are welcome to browse our library, our artwork and the warmth of our fire.

We hope you will come discover this little-known hidden gem of Idaho!

"Wild, wonderful ride, but a peaceful weekend with old friends. The food was sooo good and the guides and staff were perfect! The cabin was a great retreat. We'll be back."

"What a wonderful place. Our stay here at River Dance lodge was for whitewater rafting. The staff here is exceptional, and their upbeat attitudes made our stay very pleasant. The might Loshsa was...

"It was great coming up with our retirement group. You folks do a great job. Cabins are clean, very comfortable, food is excellent! Looking forward to more days on the water."

"It's been wonderful celebrating our anniversary here! The cabin exceeded our expectations. Thank you so much for your hospitality and kindness. You've become a part of an already memorable time...

"My son and I spent a few days kayaking on the Clearwater and rafting the Lochsa. We had the time of our lives, and grew closer together this week. I'm sorry to see this trip end. I could stay...

"We had a wonderful weekend - to celebrate our son's 11th birthday. Beautiful area. We really enjoyed our stay and definitely plan to return we have the time."